Owned by the National Trust, and maintained by English Heritage, Housesteads is set on an exposed escarpment, with stunning panoramic views, midway along Hadrian’s Wall.

Also known as ‘Vercovicium’, Housesteads is widely acknowledged as the most complete example of a Roman fort in Britain, and one of the most well-known from the entire Roman Empire.

The Housesteads tour takes half a day, but can also be combined with a visit to the Roman Army Museum to create a whole day tour.

Catherine’s tour will introduce you to:

• The fort’s role in both the British Roman occupation and the wider Roman Empire, as well as explaining how Housesteads would have interacted with the other military installations along Hadrian’s Wall and the older ‘Stanegate’ Roman forts;

• The geological features that dictated the location of the fort on Hadrian’s Wall;

• The military zone along Hadrian’s Wall and the ‘Vallum’;

• The fort which occupied the site, and the buildings it contained, and how they changed during the life of the fort throughout the Roman occupation and beyond. Highlights include the fort’s Headquarters Building, the Commanding Officer’s House, the hospital, granaries, barracks, and the famous latrines;

• The buildings within the Vicus (the village adjoining the fort), including the infamous ‘Murder House’;

• The post-Roman settlers, from the early Christians and Anglo Saxons, through to the Border Reivers and the antiquarians;

• The recently refurbished Museum, adjacent to the fort, where artefacts discovered at Housesteads are on display.

Duration:      Half day (Housesteads only)

Reductions for groups of three people or more

This price includes return transport from your accommodation, or a local railway station or bus stop, admission to each site, refreshments (including lunch on the whole day tour) and a guide book per adult.

Please note that Housesteads is a challenging site, with steep slopes and uneven surfaces. If you have any concerns about access, please contact Catherine and she will be happy to advise you. 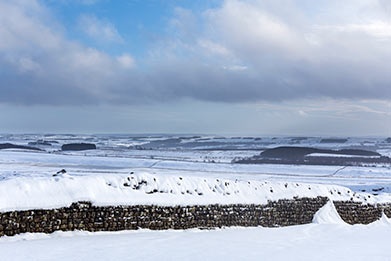